Revised draft regulations pertaining to financial provisioning for reconnaissance, prospecting, exploration, mining or production operations were released for public comment in terms of the National Environmental Management Act 107 of 1998 (“NEMA”) by Minister Barbara Creecy on 11 July 2022. The period for public comment will remain open until 25 August 2022.

This revised draft follows numerous stakeholder engagements and comments on various previous drafts, with the most recent prior iteration of the regulations having been released for comment on 27 August 2021. The Department of Forestry, Fisheries and the Environment has indicted that this is anticipated to be the final window for comments. The draft regulations, which will be known as the Financial Provisioning Regulations, 2022, are intended to repeal and replace the current Financial Provisioning Regulations, 2015, which sent shockwaves through the mining industry when they were introduced in November 2015. The introduction of this final draft for comment follows the recent publication of the National Environmental Management Laws Amendment Act, 2 of 2022, which was Gazetted on 24 June 2022, but is yet to come into effect, and which also substantially changes the current position under NEMA relating to financial provisioning relating to environmental rehabilitation.

A few notable aspects of the draft Financial Provisioning Regulations, 2022 include the following: 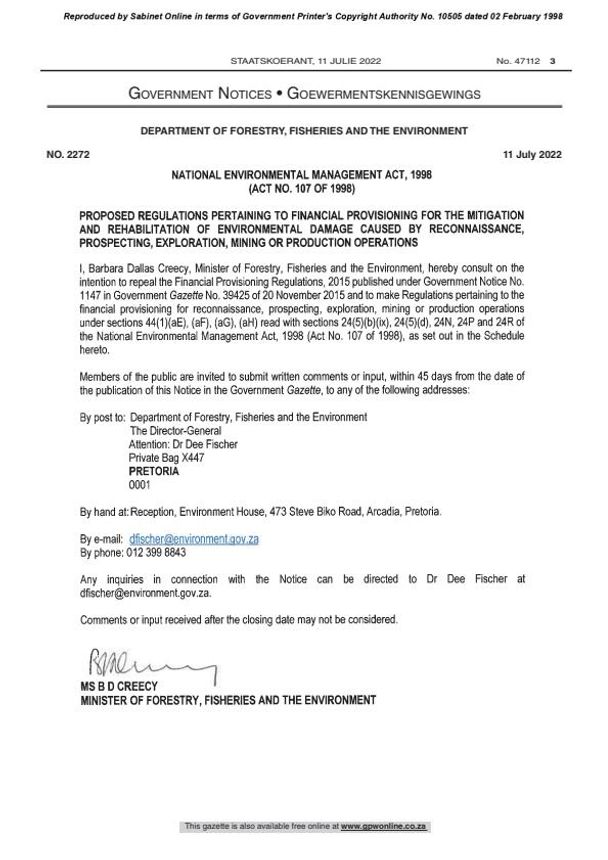